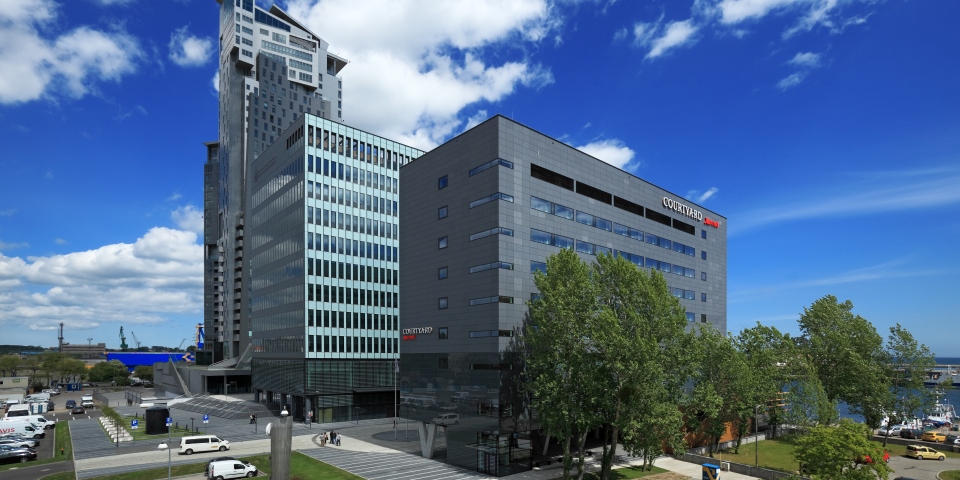 The first stage of the multi-functional Gdynia Waterfront complex, which is being constructed between Sea Towers and Kościuszki Square at President’s Bay in Gdynia has been completed. The complex consisting of two office and hotel buildings commissioned at the beginning of June 2015 provided 20,000 m2 out of the planned 90,000 m2 of leasable space. The office building is to be used as PKO BP offices and a four star hotel is going to operate under the Marriott Courtyard brand.

The office building has 11 floors, two more than the hotel. The structure of the building, and in particular the ceiling joists span which is non-standard in Poland and the lack of structural elements on certain floors makes it possible to freely arrange the interiors. On the groundfloor of the building there will be a bank branch and a coffee shop with the front facing the sea.

The Marriott Courtyard Hotel operated by Scandinavian Hospitality Management was opened in the beginning of June. The hotel is mainly dedicated to business clients. It has 200 rooms and a conference centre consisting of nine conference rooms, the largest of which can accommodate 470 people. Guests can also use a fitness club, bar and restaurant located on the ground floor.

There is one common basement for both buildings which comprises a single-level garage hall with 120 parking spaces, locker rooms and showers for cyclists.

The buildings of the Gdynia Waterfront complex use a number of modern technologies controlled by two building intelligence systems: KNX (a system for networking and controlling building technology) and BMS (building management system). It is worth noting that the air-conditioning system based on chilled beams uses sea water for cooling, while the installed elevators in the buildings are equipped with power-regenerative function. The “clean drive” technology reduces the use of energy by about 30%, and recovered by the crane drives power is transmitted directly to the power grid from which buildings are supplied with electricity.