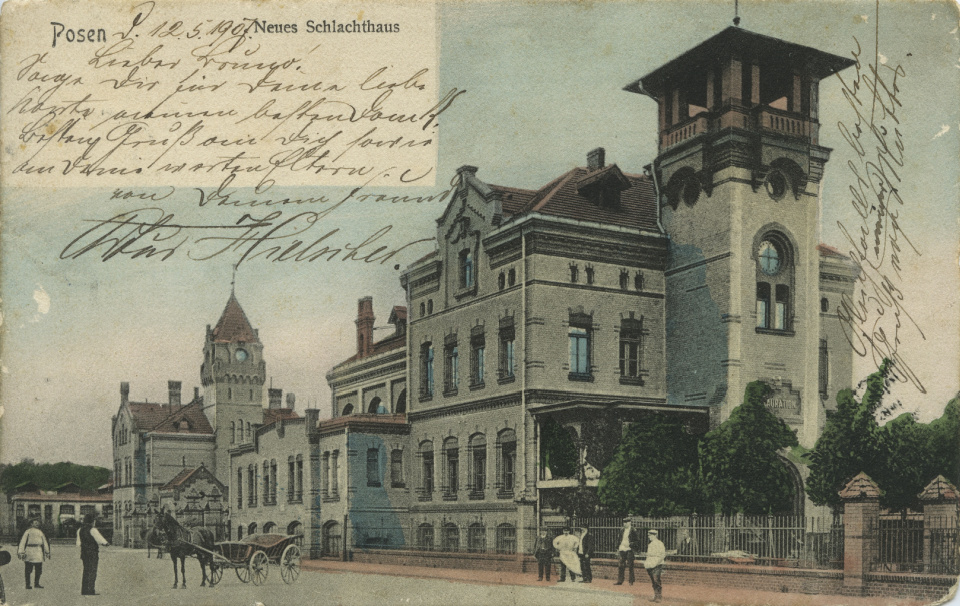 Vastint Poland organized the exhibition STARA RZEZNIA YESTERDAY, TODAY, AND TOMORROW. The antique postcards and photographs displayed in the courtyard of the City Hall (Wolny Dziedziniec Urzędu Miasta) show the wonderfully designed industrial architecture and interiors of the former factories, which were hidden behind walls from the beginning of their existence and, therefore only available and known to a few city residents.

The exhibition that opened today documents the Municipal Slaughterhouse’s history in Grabary from 1900 to the present day, through the prism of human experience. From beautiful architecture and Prussian order, through the prosperous pre-war years as the plant continually expanded, followed by Soviet soldiers appearing among the war ruins, up to more recent times when the closed factories were annexed by artists staging off-theatre plays there, collectors offering their rare books, and antique dealers.

“The old panoramic photos showing the symmetrical urban layout of the plants and photographs showing the representative building of the Resursa — which once housed the stock exchange, an elegant restaurant, and hotel — make the greatest impression,” says Ewa Łydkowska, Marketing Manager of Vastint Poland. “Equipped with a Tuscan tower, the Resursa building perfectly fits into the eclectic nature of the neo-Gothic complex of the Municipal Slaughterhouse. Since the battles for Poznan at the end of World War II, when the building was largely destroyed, it has never regained its glory. Today it is difficult to even say that its remains attract attention. We plan to carry out a faithful reconstruction of the building as part of the investment, for which we are carefully preparing,” adds Ewa Łydkowska.

In the courtyard of the City Hall, there are also photos showing the lives of Poznan residents related to the meat processing plants. Some of the presented works are very personal, even touching photos from family archives submitted to the competition organized by CYRYL – the Digital Local Repository in Poznan. The exhibition ends with a display of how this place will look in the future.

According to the concept, the approximately 5.5-hectare site of Stara Rzeznia will be transformed into a coherent, urban, and architecturally interesting part of the city centre. Vastint plans to renovate the buildings of the former meat factories under conservation protection and to adapt the spaces mainly for service and catering functions, including theatre, restaurants, and a market hall, as well as the construction of new residential, office, and service facilities. The spacious squares around the historic buildings of Stara Rzeznia will become a meeting place for Poznan residents and a backdrop for artistic and cultural events. The estimated usable area of the complex is approximately 70,000 m2.

“Stara Rzeznia and the plans related to its reconstruction arouse the interest of the inhabitants of Poznan. For many months, under the supervision of the Municipal Conservator of Monuments, we have been working on the development project and we hope that we will soon be able to present the complex in a new version. The design is constantly evolving, but from the very beginning our overriding goal has been to integrate the complex into the existing city development and integrate it with the existing infrastructure. Together with the city authorities, we are focused on making the final result interesting not only in terms of architecture but also functionality. We want to create an interesting place to live, work, and relax for the inhabitants of Poznan, in which the history and modernity of the city will be combined,” comments Rafał Przybył, Regional Manager of Vastint Poland.

The photos presented at the exhibition come from the collections of the University Library in Poznan, the Municipal Conservator of Monuments in Poznan, CYRYL, as well as private individuals. With free admission, the exhibition will run until the beginning of January 2022.