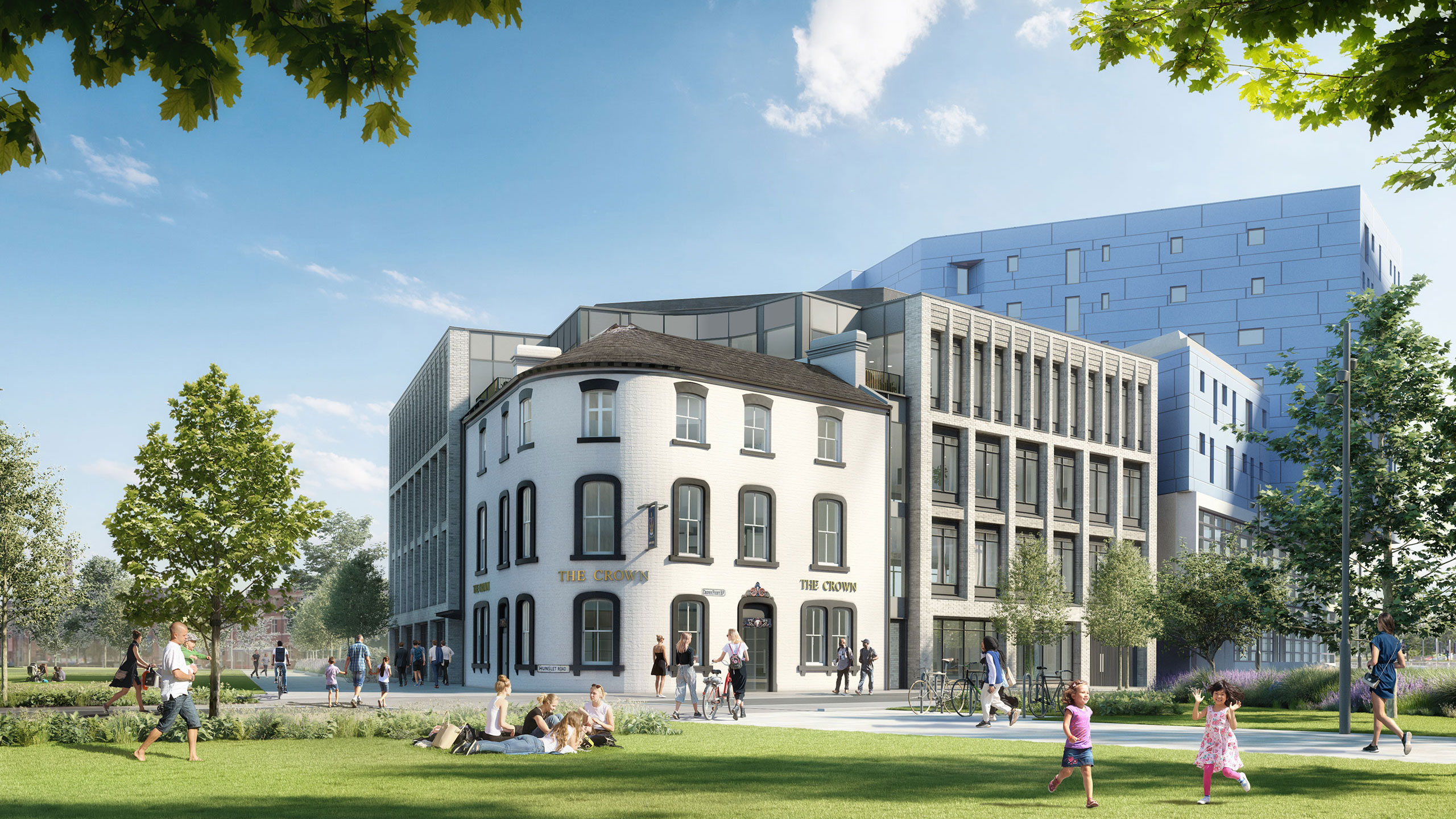 Vastint UK has been granted planning consent for two significant aspects of Aire Park, a new park and the restoration of The Crown pub on Crown Point Road.

THE PARK
Detailed proposals for what will be the largest new city centre green space in the UK, were officially approved by Leeds City Council’s plans panel on Thursday, 3 September. The park will feature a series of connected and diverse open spaces, allowing it to be used year-round, day and evening and for a multitude of purposes.

Prioritising green spaces and pedestrian and cycle routes connecting the city centre to the south of Leeds, Aire Park will help with the number one priority for Leeds: to reduce carbon emissions and improve air quality in the city centre.

Details of the first two hectares of the park include the following distinct areas and elements:

The Tetley Triangle
An exciting new and dynamic public event space suitable for concerts, markets and outdoor cinema will be approximately half the size of Millennium Square, animated by surrounding shops, cafés, homes and offices. The Tetley Triangle will be bounded by the iconic Tetley building and the Grade II listed Salem Chapel. Planning is expected in the coming weeks for 28,000 m2 of office space to complete the Tetley Triangle, as a key boost to the economic potential of the South Bank district.

Theatre Gardens
A modern ornamental and sensory garden for quiet enjoyment, connecting the park to the River Aire with pedestrian pathways.

North Park
Situated between the proposed residential buildings of Aire Park and an existing development at Brewery Wharf, this area is designed to offer sustainable resources as well as a wet, woodland habitat, including a children’s play area.

Central Park
A large, green park space between The Tetley and Crown Point Road including play and/or exercise areas, a water feature or sculpture, grassed areas and significant parkland. A sweeping path will connect the park to the residential area.

The Green
A grassed and stepped amphitheatre and seating area for informal performances, a similar size to Merrion Gardens.

The Hunslet Stray
A 6m-wide communal pathway connecting pedestrians and cyclists from north to south from Leeds Bridge.

The Cherry Walk
An enchanting avenue of cherry trees running the length of the park.

A 1km exercise route
Weaving between the trees, the running/dog-walking/strolling route will circle around Aire Park.

Leeds City Council is keen to make the park an asset for the city and so will take a 250-year lease of the completed park from Vastint UK to manage, operate and maintain the park, with financial and governance support from Vastint UK. An additional 1.5 hectares of parkland is expected to be included in the second phase of development.

THE CROWN
Last week planning permission was also granted by Leeds City Council for Vastint UK to restore and expand The Crown pub within Aire Park, a much-loved former pub which is now derelict. The ground floor will house a local pub and restaurant within the original Victorian building, while the extension will be home to new retail and office space. the article